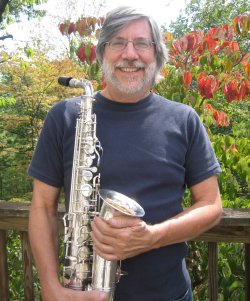 United States
Tracks
Videos
Photos
Blog
About
Gina's Waltz
by Roger Aldridge
Influence: North American
Genre: jazz, instrumental
share
repost
comment
add to favorites
About "Gina's Waltz"
Gina's Waltz was composed in 1993 for Gina Eichman, a Baltimore-based classical flutist, who participated in a benefit concert I organized that year for the Chesapeake Bay Foundation. This piece features the lower range of the flute and has a playful spirit. Recorded by David Arivett.

It was performed at the CBF concert with flute & guitar. Gina played the melody as notated (taking measures 12-22 an octave higher for contrast) and Mickey Vierschilling used the lead sheet to improvise a guitar accompaniment. After that performance Gina's Waltz gathered dust for 18 years until it was discovered in 2011 by George Spicka, a composer friend in Baltimore.

See all tracks (38)
Follow
Send Message
About
I am primarily a jazz composer. A wide range of influences are found in my music including tango, blues, samba, fusion, ragtime, contemporary classical, American roots music, and other kinds of music that interest me.

Listed in International Who's Who in Music.