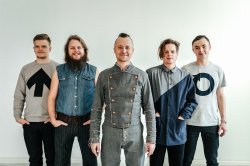 Svjata Vatra’s „Unelaul“ („Lullaby“) from new CD „Maailm, sa muutud!“ („World, you are changing!“.
The very first songs we hear are lullabies that parents sing to a newborn child with endless love. There is a magical power in these songs, connecting the child with parents and family - bonding different generations.
Ruslan’s (Svjata Vatra’s lead singer) grandmother sang this song to his mother, who sang it to Ruslan and now Ruslan has been singing it to his own children – the song has been known in the family for at least 5 generations.
It is very important to hear the lullaby in ones mother tongue. This particular song has originally been in Ukrainian, but Ruslan’s children have two mother tongues - so he translated it to Estonian too and the children have always heard it in two languages.
In this record we can hear Ruslan’s eldest daughter Rute, who was also the original reason for the translation. His children have been born at home and this lullaby has been the very first music for all of them.
Not only are lullabies bonding the families – they can also bring back childhood memories and for adults, reminding them the warm feeling of being loved and cared about. Let’s all share this beautiful feeling by remembering our own old lullabies and singing them to our children and grandchildren.
Ukrainian traditional song „Lullaby“
Music: R.Trochynskyi
Lyrics: Ukrainian trad., Estonian translation by Ruslan Trochynskyi
Arrangement: Svjata Vatra
Performed by Svjata Vatra (Ruslan Trochynskyi, Juhan Suits, Karl-Heinrich Arro, Robin Mäetalu, Ats Tani) with guest Rute Trochynskyi
Support Svjata Vatra: more

CD World, You Are Changing - cover

World, You Are Changing CD inside
See all photos (7)
Follow
Send Message
About
BAND